As a matter of personal preference, it's my policy to not reveal the names of actors who study with me.  I suppose I consider it confidential if they privately study or prepare for a role with me.
This policy seems to be appreciated by the actors who work with me.  With the permission of Russell Charles Pitts, I'm temporarily breaking that policy.

I want to discuss two separate categories:  Artistic taste and artistic criteria.  Elsewhere on this blog I've made my case for artistic criteria; not so regarding artistic taste.  In particular, the actor's performance in a role that depicts a person who has been in our lived experience.

Mr. Pitts contacted me when the Tupac Shakur bio-pic was casting.  We worked on the audition sides that were provided by the CD.  The CD told Russell that his audition tape would be forwarded to the producer, but to be patient regarding his callback because a "world-wide" search was on to find an actor for this role. During the ensuing months, on his own, Russell worked on the physical behavior of Tupac.  He also asked me how he could further keep the character alive in himself (we didn't have a script to work from).  I suggested he transcribe, verbatim, one of the Tupac interviews we'd studied, and rehearse it as he would any scene.  Since we had the opportunity to consider interpretation in more detail than in a 48-hour audition preparation time-frame, I encouraged Russell to avoid mimicry (you're not him; even f you resembled him, never would you be able to achieve his essence, the particular sparkle in his eyes; but you can aim for your understanding of his essence; your interpretation of his essence").  In the attached comparison of Tupac's interview and Russell's interpretation of Tupac's interview, I think we had the beginnings of an artistic interpretation of character.

Consider also the difference between art and mimicry in Philip Seymour Hoffman's portrayal of Truman Capote, and Tony Jones's portrayal, especially since Mr. Jones physically resembles Capote more than Mr. Hoffman in a comparison with Mr. Capote himself:


Or, the chilling work of art created by Meryl Streep in her interpretation of Ethel Rosenberg.  In this scene from Angels in America, I think both she and Al Pacino performed not mimicry, but a fully-drawn interpretation of character.  Interestingly, there was much less for Ms. Streep to go on in terms of observing the character, yet in my opinion, taking into account her other biographical portrayals, it was her most profound rendering of the essence of the character. 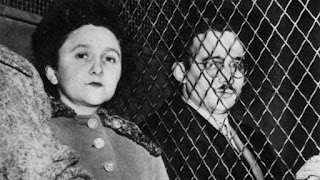 Posted by June Barfield at 4:37 PM