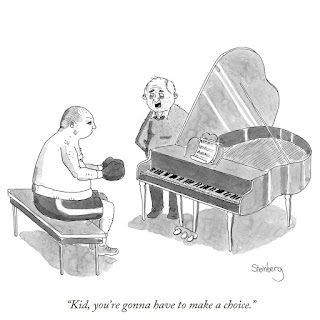 The Group Theatre produced Clifford Odets' play Golden Boy on Broadway in 1937.  The film version, not written by Odets, was produced in 1939.  Earlier this year Avi Steinberg's cartoon appeared in The New Yorker.  For a moment I thought Mr. Steinberg might be referring to the play, and captured the essence of what I had always thought was false in it with just one image and one sentence; perhaps he was referring to it. Golden Boy was produced at Lincoln Center as recently as the 2012/2013 season.  Perhaps not.  Regardless, thinking about the play again now reminded me of my years of study and how often scenes were used from Odets' plays by student actors because he was such a good dramatic scene writer; his dialogue crackled with passionate imagery.

For example, here's the end of Act III, Scene 2 from Golden Boy:

LORNA:  And now, tonight, here, this minute - finding yourself again - that's what makes you a
champ.  Don't you see that?
JOE:  Yes, Lorna - yes!
LORNA:  It isn't too late to tell the world good evening again!
JOE:  With what?  These fists?
LORNA:  Give up the fighting business!
JOE:  Tonight!
LORNA:  Yes, and go back to your music --
JOE:  But my hands are ruined.  I'll never play again!  What's left, Lorna?  Half a man, nothing,
useless....
LORNA:  No, we're left!  Two together!  We have each other!  Somewhere there must be happy boys
and girls who can teach us the way of life!  We'll find some city where poverty's no shame -
where music is no crime! - where there's no war in the streets - where a man is glad to be
himself, to live and make his woman herself!
JOE:  No more fighting, but where do we go?
LORNA:  Tonight?  Joe, we ride in your car.  We speed through the night, across the park, over the
Triboro Bridge --
JOE;  (taking LORNA's arms in his trembling hands):  Ride!  That's it, clear my head.  We'll drive
through the night.  When you mow down the night with headlights, nobody gets you!  You're
on top of the world then - nobody laughs!  That's it - speed!  We're off the earth - unconnected!
We don't have to think!!  That's what speed's for, an easy way to live!  Lorna darling, we'll burn
up the night! (He turns and as he begins to throw his street clothes out of his locker)

In the final short Scene 3 that follows, his family learns that they were both killed in the car; it crashed on Long Island; and the last line of the play is:

In the final scene of the film, Joe and Lorna come home, alive, to embrace Mr. Bonaparte.  "I'm home," says Joe, and in the scene just prior, none of the ideas in the scene from the play were used.

Clifford Odets described this play as "symbolic", and, as he expressed, and as has been written about him, once he was lured to Hollywood, his guilt about compromising his ideas and his talent never left him.  Clearly, Golden Boy was intended to be symbolic of that conflict, but, as is so graphic in Steinberg's cartoon, one can't wear boxing gloves and play a musical instrument simultaneously; it's either one or the other.  However, the compromises Odets had to make were not so clear-cut; they were ambiguous.  How much more difficult it would have been to get closer to the central conflict, the actual ethical dilemma with which Odets was grappling!

In the Barbara Cook treasure trove of videos on YouTube, one can hear her say, "If you can get to the point where you are ready to use every joy, every death, every lover who has left you...If you are willing to explore that within the song, you cannot be wrong."  And especially when her disjointed sentence told a student, "The very place where safety lies for us is the same that seems most dangerous, and the sharing - the courage to let people really, really get into what life is into -- and sets it free."

I encourage you, during these difficult times, when our central conflict is camouflaged, to not permit yourself to fear, but rather, in your life and work, to explore ever more deeply what you truly think and feel and share it courageously, remembering that it is indeed where safety lies -- where you are most safe and free.